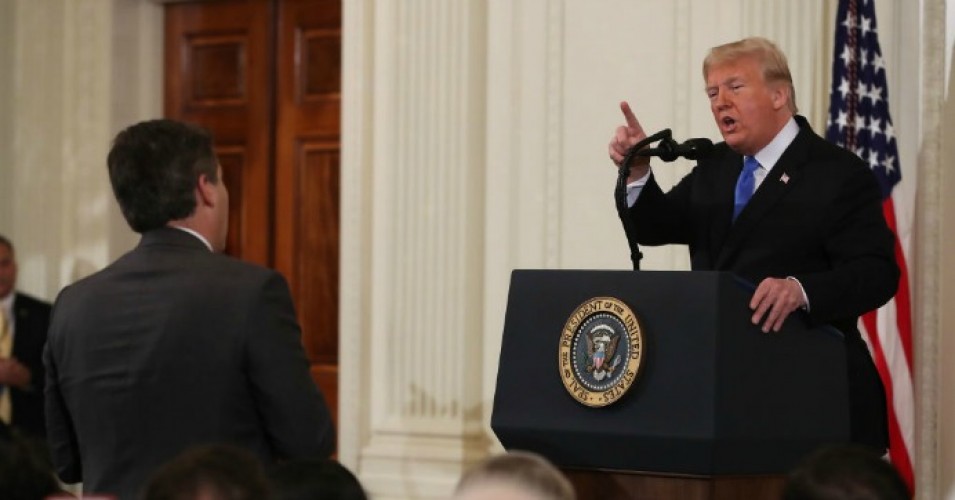 The White House has revoked the press badge of CNN’s Chief White House Correspondent, Jim Acosta, following a heated exchange with President Donald Trump at a press conference on Thursday.

White House Press Secretary, Sarah Sanders, announced on Wednesday evening that the decision was a result of Acosta’s behaviour, for yanking back when a White House intern tried to take his microphone.

Sanders said: “President Trump believes in free press and expects and welcomes tough questions of him and his administration.

“We will, however, never tolerate a reporter placing his hands on a young woman just trying to do her job as a White House intern.

“This conduct is absolutely unacceptable. It is also completely disrespectful to the reporter’s colleagues not to allow them an opportunity to ask questions.

“President Trump has given the press more access than any President in history,” Sanders said.

Earlier on Wednesday, Trump refused to answer a follow-up question from Acosta after he persisted in attempting to ask the president about the Russia investigation into interference in the 2016 U.S. presidential election.

A visibly angry Trump then spoke loudly over Acosta and demanded that he handed over the microphone to White House staff.

“You should let me run the country. You run CNN,” the president told Acosta before adding, “I tell you what: CNN should be ashamed of itself, having you working for them. You are a rude, terrible person”.

Acosta said on CNN while reacting to the revoking of his ‘hard pass’: “it was a pretty surreal experience. I never thought in this country that I wouldn’t be able to go and cover the President of the United States simply because I was trying to ask him a question”.

Later, CNN issued a statement saying: “this President’s ongoing attacks on the press has gone too far. Such attacks are not only dangerous, but they are also disturbingly un-American”.

Sanders, however, said “contrary to CNN’s assertions, there is no greater demonstration of the President’s support for a free press than the event he held on Wednesday.

“Only they would attack the President for not supporting a free press in the midst of him taking 68 questions from 35 different reporters over the course of 1.5 hours, including several from the reporter in question.

“The fact that CNN is proud of the way their employee behaved is not only disgusting, it‘s an example of their outrageous disregard for everyone, including young women, who work in this administration.

“As a result of Wednesday’s incident, the White House is suspending the hard pass of the reporter involved until further notice.

“We stand by our decision to revoke this individual’s hard pass. We will not tolerate the inappropriate behaviour clearly documented in this video,” Sanders added and then posted the video of the encounter.

The White House Correspondents Association in a statement, said “it strongly objects to the Trump Administration’s decision to use U.S. Secret Service security credentials as a tool to punish a reporter with whom it has a difficult relationship.

“Revoking access to the White House complex is a reaction out of line to the purported offence and is unacceptable,” the association said.

The association called on the White House to “immediately reverse this weak and misguided action”.

Trump coined the phrase “fake news media” and has targeted certain reporters and outlets consistently over his two years in the White House.

READ ALSO: “WE DID NOT GO TO THE RESIDENCE OF EKWEREMADU TO ASSASSINATE HIM OR ANYBODY” – PRINCIPAL SUSPECT