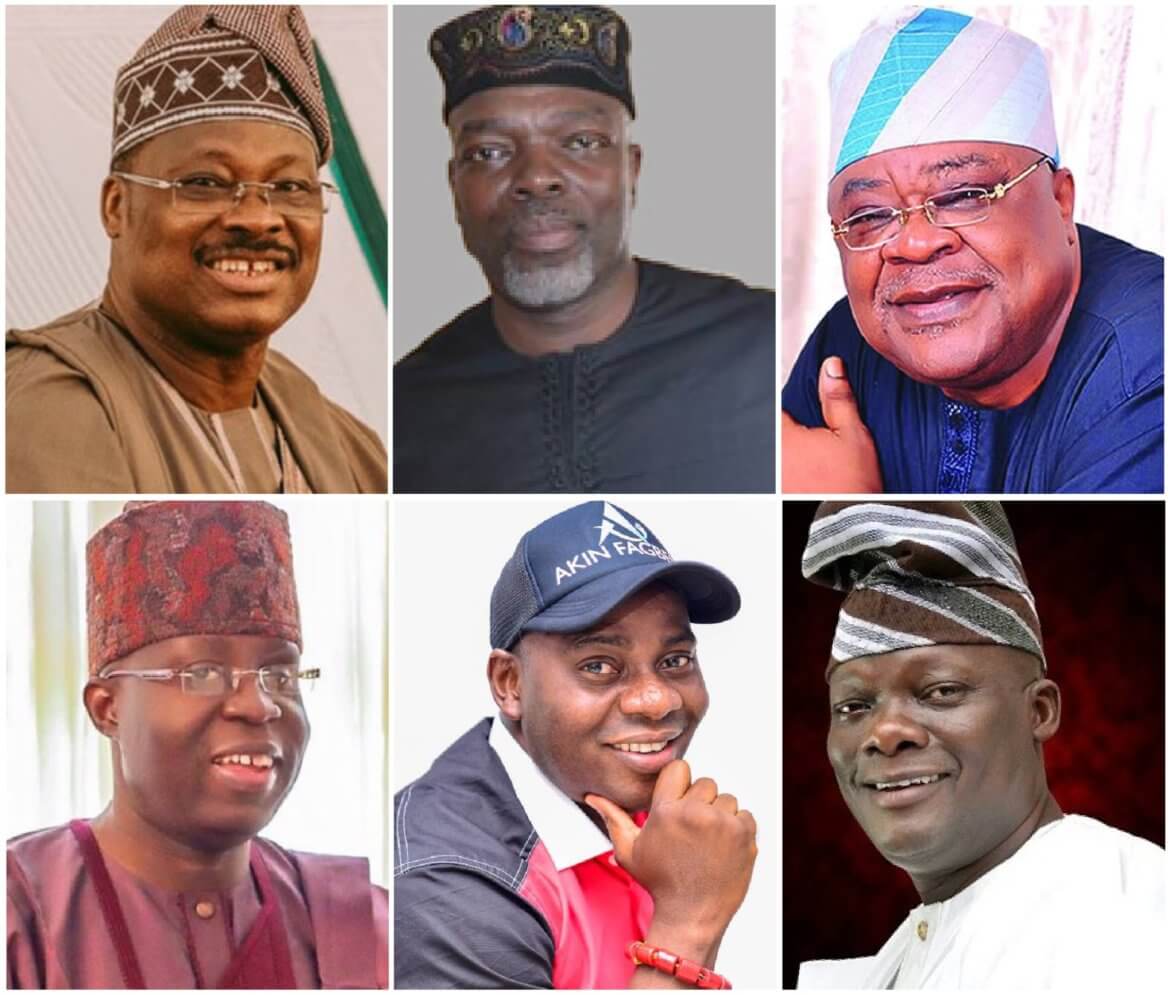 Apart from Guber race, one election many are looking forward to with keen interest as the 2019 general election draws near in Oyo state is senatorial seats of the three zones in the state (Oyo South, Oyo Central and Oyo North). Reason for this curiosity is not far-fetched, some political giants in the state have been mentioned as the likely contestants in the race.

Though there has not been official statement/declaration from those mentioned, except for the incumbent governor Senator Abiola Ajimobi whose aides have been telling whoever cares to listen that the governor is indeed running for Oyo South Senatorial District seat at the expiration of his tenure in 2019, but body language and political permutation especially within the ruling party (APC) in the state is tilting towards that believe.

Political watchers in the state, however, are of the opinion that while the election will be a kind of litmus test for the new entrants as per their political relevance, it would also serve as an avenue for the established politicians in the race to prove their political sagacity. In this report, City People’s Correspondent, DARE ADENIRAN presents to you list of Oyo top politicians who want to contest for the three senatorial districts, to represent their respective zones in the country’s Upper Chamber come 2019. The list cuts across all the political parties in Oyo state. Read on.

SENATOR ABIOLA AJIMOBI.
Governor Abiola Ajimobi is about to set yet another record in the history of Oyo politics, if his ambition to represent Oyo South Senatorial District in the Upper Chamber come to reality in 2019, at the expiration of his tenure.

The gap-toothed governor is known for setting high record; he has broken the second term jinx and set high standard as far as governance is concerned in the state. He has become a rally point in the state politics, a major stake holder and ultimate leader of the ruling party (APC) in the state. Many say he will be banking on his political antecedents and achievements as governor in achieving his senatorial ambition.

OTUNBA ADEBAYO ALAO-AKALA.
Akala, the former governor of Oyo State, has over time a major to be rocked with in the state’s politics. He is a grassroot politician who understands the in and out of Oyo politics. It will be difficult to beat Akala in Ogbomoso and some other parts of Oke-Ogun, he is well popular across all the geo-political zones of the state. In fact, his senatorial bid was said to be part of his bargains of coming to APC from Labour Party, under which he contested the last election. And also a major strategy that APC is using to win guber and other elections come 2019. Though he has not made official statement on his plans as far as 2019 is concerned (if fact his governorship posters are all over the place lately), but he is said to be contesting for the Oyo North senatorial slot in 2019.

SENATOR FATAI BUSARI.
Apart from the fact that the current senator representing Oyo North in the country’s Upper Chamber, Abdulfatai Buhari has done well as a serving senator, he a brilliant political antecedents too. He has served as House of Reps member between 2003 and 2007. Though he has since made known his intention to run for the number seat in the state come 2019, but some say the present political alignment in the state may not favour him. Even if he has to go back to the Senate, he will have to battle former governor Akala for the senatorial ticket of the zone in APC. He is from Ogbomoso.

SENATOR MONSURAT SUNMONU
She is currently the APC Senator representing Oyo Central in the country’s Red Chamber. She is former Oyo State House of Assembly member from Oyo town. She is likely to be going back to the Senate but there are strong indications that the ticket of that zone will be given to Senator Teslim Folarin.

SENATOR SOJI AKANBI
The Ibadan born prominent politician has once served in the Federal House of Reps. He is presently presenting Oyo South in the Senate. Though he has declared his intention to run for Governorship, but some say if at the end of the day Governor Ajimobi is not running for senate Soji Akanbi may find his way back to the Senate.

SENATOR TESLIM FOLARIN.
The former Senate Leader, Kolawole Tesim Folarin is another strong stakeholder in Oyo politics. The story within the political space of the state is that Oyo Central Senatorial ticket may have been conceded to Folarin as part of bargains of his defection to APC from PDP.

SENATOR GBENGA BABALOLA.
He represented Oyo North between 2007 to 2011 in PDP. Gbenga Babalola is another stronger politician from Oke-Ogun zone and he is said to be warning up to go back to the Senate.

SENATOR HOSEA AYOOLA AGBOOLA.
Former Deputy Chief Whip of the Nigerian Senate, Senator Hosea Ayoola Agboola is a candidate to beat in any election as far as Oyo politics is concerned. He is very strong in Oke-Ogun area of the state. Ayoola is also one of the PDP stakeholders in the state working day and night to see that the party is properly positioned and all aggrieved members are reconciled ahead of 2019 election. If the story coming from political circle in the state is anything to go by, then Senator Ayoola Agboola may contest the Oyo North senatorial seat come 2019.

CHIEF BISI ILAKA.
With all indications, Chief Bisi Ilaka may be giving Oyo Central Senatorial slot a shot again. The financial and Tax Consultant with many years of experience, Bisi Ilaka contested election under Accord in 2011 and 2015 respectively. He is one of the former governor Ladoja’s loyalists who decamped with him from Accord to PDP.

HON. KAMIL AKINLABI.
Hon. Kamil Akinlabi he is a former House of Representatives member who represented Oyo Federal Constituency. We heard Akinlabi is getting ready for Oyo Central Senatorial seat come 2019. He will battle other aspirants for APC ticket of that zone.

DR. AKIN FAGBEMI.
Akintomide Stephen Fagbemi, Mogaji of Agunlehinju Compound Alekuso area of Ibadan, is a Health and Nutrition expert. He has operating at the background in Oyo politics before now. He is one of the fine technocrats in politics. Fagbemi has an intimidating C.V. He is a certified SQF auditor United State of America. He holds a Master Degree in Food Processing and Preservation and Ph.D. in Biotechnology.

He has a (Post Graduate) Diploma in Nutrition from the Prestigious Ahmadu Bello University, Zaria, and Certificate in International Food Law and Legislation, Michigan State University, USA.

He was formerly with National Agency for Food and Drugs Administration and Control (NAFDAC) as a Monitoring and Evaluation (M&E) expert in Food Safety and Applied Nutrition in PR&S Directorate Abuja. He was the team Head, Step-Down Training, Planning Research Statistics directorate in the Agency.

Through his Akin Fagbemi Foundation, thousands of people have benefited from Akin Fagbemi’s kind gesture. He has helped many to secure employment at key places, several educational scholarships are being given to many. Fagbemi has paid and still paying for WAEC and JAMB forms of many from his local government (Ibadan North West Local Government). All these plus many other things are the reasons his people are mounting pressure on him to contest the Oyo South Senatorial seat come 2019, under PDP.

ALHAJI FATAI IBIKUNLE.
Alhaji Fatai Ibiknle was the Personal Assistant to late former governor of Oyo State, Alhaji Lamidi Onaolapo Adesina. He is presently the Chairman of the National Lottery Regulatory Commission. He has signified his interest to run for Oyo South senatorial slot, under APC.

HON. BIMBO KOLADE.
The Hon. Commissioner for Local Government & Chieftaincy Matters, Bimbo Kolade is from Oke-Ogun. He is one of the brilliant commissioners in Ajimobi’s government. He is said to be interested in contesting the Oyo Central Senatorial seat under APC come 2019.

The Race For The 3 SENATE Seats In OYO State Hots Up was last modified: April 2nd, 2018 by Dare Adeniran