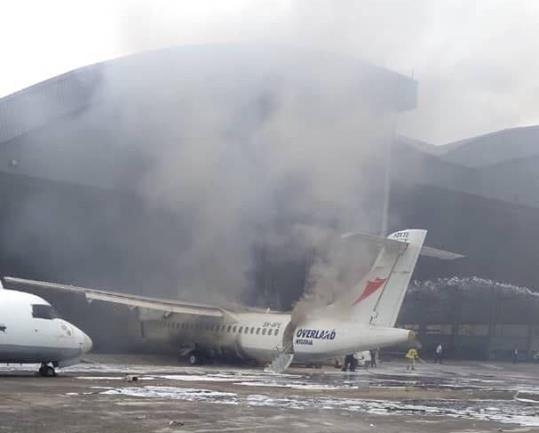 An aircraft belonging Overland Airways, one of the indigenous carriers, has got burnt following a fire outbreak this morning at the hangar.

The aircraft was parked at the hangar located in the General Aviation Terminal (GAT) of Murtala Muhammed Airport, Ikeja when the fire started.

The cause of the fire was unknown as of the time of filing this report.

A video footage of the fire seen by our correspondent showed the hangar engulfed in flame while the firefighters battle to put off the fire.

An incident report obtained by our correspondent said: “The information gathered at the scene of the incident (Overland Hanger) was that the aircraft was parked at the Hanger and while powered by the ground power unit the aircraft caught fire.

The Director of Operation, FAAN Captain Rabiu and NCAA CPD Terminal head GAT Mr Banjo met with Overland Executive Director Mrs Aduke Atiba who informed that she is yet to know the cause of the fire outbreak as she was informed while in the hospital and have to rush to the scene of the incident. She promised to get full details after meeting with the managers on ground by 1300hrs.”

READ ALSO: TEENAGER REMANDED FOR STABBING ANOTHER TO DEATH WITH COBBLER’S NEEDLE