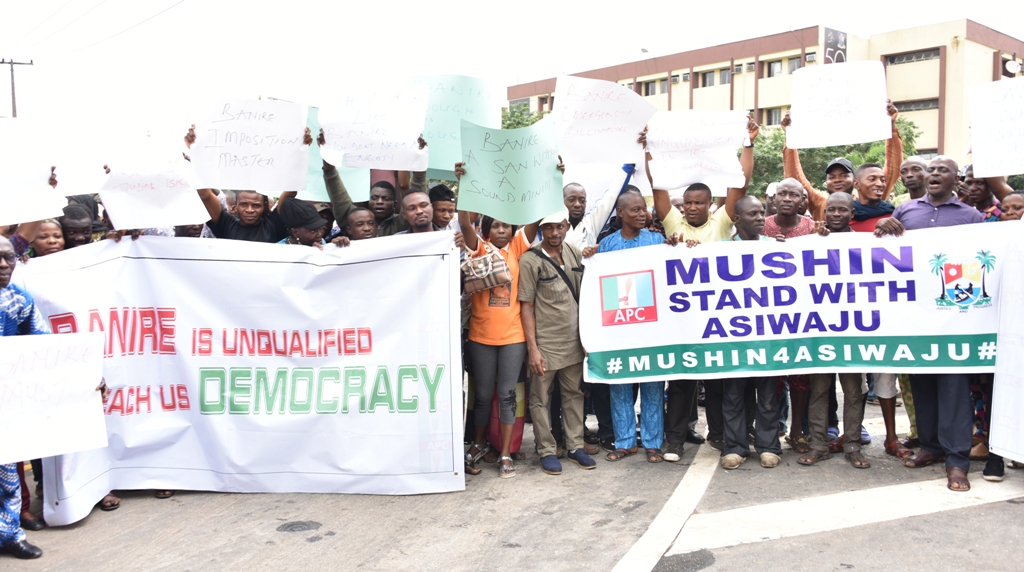 Scores of leaders and members of All Progressives Congress (APC) in Mushin Local Government and Odi Olowo Local Council Development Area (LCDA) of Lagos State on Tuesday demanded the expulsion of the party’s National Legal Adviser, Muiz Banire from the party over series of anti-party activities and alleged embezzlement of campaign funds.

The protesters led by a chieftain of the party in the area, Mr Femi Martins, said they were constrained to make the demand owing to Banire’s several excesses and public utterances which were aimed at causing public disaffection and electoral misfortune against the party, particularly during the forthcoming Local Government election in the State.

Specifically, the protesters, who proceeded from the party’s Secretariat in Acme Road, Ogba to Governor’s office in Alausa, displayed placards of various inscriptions such as “Enough Is Enough, Banire Must Go; Banire, Custodian Of Party Destruction; Banire, The Greatest Beneficiary Of Imposition; Banire, A Hypocrite Per Excellence; Banire, The Modern-Day Judas Iscariot; Banire, A Serial Traitor; Banire Is Unqualified To Teach Us Democracy,” among others.

Reading from a protest letter addressed to Governor Akinwunmi Ambode and copied the Speaker of Lagos State House of Assembly, Rt Hon Mudashiru Obasa and APC Chairman in Lagos, Chief Henry Ajomale for onward transmission to the national headquarters of APC, Martins said as custodian of the party’s Constitution, Banire was well aware of the party’s provisions for direct, indirect and consensus primaries, but he has played to the gallery and publicly accused the party of imposition without exhausting the internal mechanisms already available within the party.

He said Banire, after the primaries of the party in Mushin and Odi Olowo, has been sponsoring his cronies to write and publish advertorials against the Party, and has been granting interviews to embarrass and have adverse effect on the Party to the extent of attracting hatred, contempt, ridicule and disrepute upon the Party.

Martins also listed the grounds for the call for Banire’s removal in office and expulsion from the party to include: “Intentional negligent in duties as the National Legal Adviser to defend the Party and the Party’s interest; Carrying out unauthorized publicity of a Party dispute without exhausting all avenues for settlement or redress within the Party; Causing and arrogantly admitting causing a Legal Representative to disavow the Party in a Law suit; Predicting and working towards the electoral failure of the Party; Inciting the public against the interest of the Party, and Falsely accusing the Party of imposition in public whereas knowledgeable of the facts of the provision of the constitution of the Party for alternative means of conducting primaries other than direct primaries.”

Other grounds, according to Martins are: “Sponsoring a group called MEF to ridicule the Party and bring the Party into disrepute; Perpetrating blatant imposition in our constituency Mushin against the wish of majority of Party members to cause disaffection within the Party; Disobeying and causing others to disobey lawful directives of the Party; and Carrying out anti-party activities towards the forthcoming local Government elections by encouraging members of his group to pick tickets of other parties.”

Besides, Martins faulted a claim by Banire that the protest was sponsored against him by certain people in government, saying that there was no iota of truth in such allegation.

He said: “If you look around, you will see some elderly people. Are they also rented? These are people that are fed up of Banire’s group and himself. He (Banire) has been in power in Mushin for over 12 years and there has been no development. Rather, Mushin has been known to be a violent place; they have embezzled our funds; they even embezzled funds meant for campaigns.

“Go to the library named after him, Muiz Banire Library. You cannot see a single notebook there not to talk of a book. No furnishing there whatsoever and they made us believe that they have spent hundreds of millions on that. That is what the people are saying. They are saying they are tired of no development and no to few people distributing our commonwealth among themselves. That is what the protest is all about.”

Receiving the letter on behalf of Governor Ambode, Special Adviser to the Governor on Communities and Communication, Hon Kehinde Bamigbetan, commended the protesters for their peaceful conduct, assuring that the letter would be forwarded to both the State and National organs of the party.

While insisting that party’s rules and regulations must be enforced, Bamigbetan urged the national leadership of APC to follow the precedent set in the case of Timi Frank, former Deputy National Publicity Secretary, and set up a disciplinary committee to adjudicate on the allegations against Banire.

“We ourselves have been embarrassed by the infantile vituperations of a career opportunist who has exploited the platform of the Asiwaju movement to get to where he is today. It is our responsibility to support your quest for justice and discipline within the party.

“We have a precedent when Timi Frank was disciplined and his offence was that he went out of the party’s communication system to embarrass the party.

He was suspended and recommended for expulsion. What else can we now say that a National Legal Adviser of the party who ought to know the limitations of the law, who ought to know that just as there is internal party democracy there is also internal party communication system and for him to have gone out of the party system to demoralize our party members, to embarrass the party and to undermine the fortunes of the party at a time when we are in the middle of an election season, there is no greater grievous offence than that,” Bamigbetan said.

He encouraged party members not to be discouraged by Banire’s actions, assuring that the party would do very well in the July 22 Local Government elections.