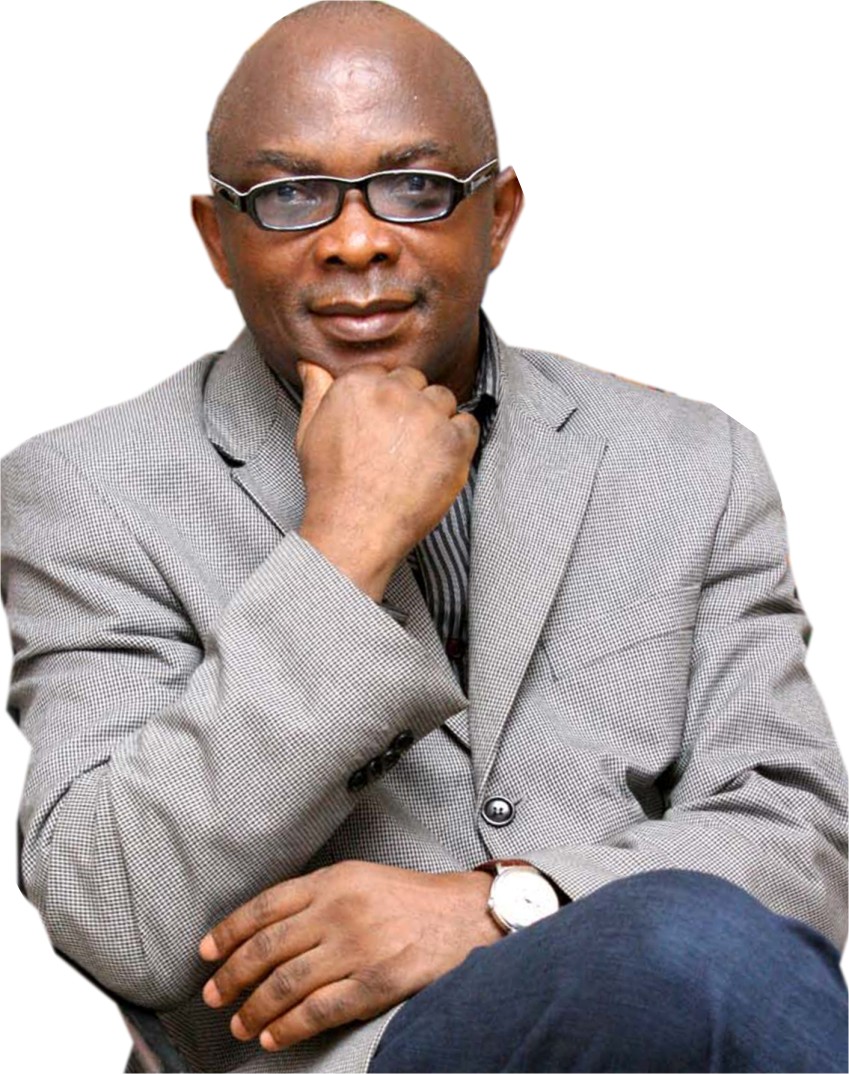 •The Story Of The King Of Tabloid Journalism

In media circles, the name Mike Awoyinfa is a big one. He is a Media Icon. He is also a living legend and a veteran newspaper man for that matter. He has made a name for himself.  He has also carved a niche for himself in that industry.

When news broke recently that Mike Awoyinfa will be clocking 70 soon, there was excitement in the air. Many just couldn’t believe that this newspaper man of yesteryears has come of age. But the truth is that Mike, who is often regarded as the King of Tabloid Journalism, will be 70 in a matter of days.

He was born on 23rd July 1952. He has been a Journalist and Writer, all his life. He was the famous Editor of Weekend Concord from 1989 to 1999, and the founding Editor-in-Chief of The Sun (Nigeria) from 2003 to 2010. Renowned for his human-interest approach to reporting, he is frequently celebrated as the father of Tabloid journalism in Nigeria. After he left The SUN, in  2011, he founded Entertainment Express, with Dimgba Igwe, his friend and writing partner. He has written various books on Business and Journalism, like 50 World Editors: Conversation With Journalism Masters on Trends and Best Practices (2015) receiving particular acclaim.

Since his abrupt retirement from The Sun, he spends more time writing new books. He remains a Director at The Sun.

When you talk to Mike, you can’t but notice his Ghanaian accent. We can tell you why. It is because he was born and bred in Ghana. Mike Awoyinfa was born at Tarkwa in the Western Region of Ghana to Nigerian parents. He grew under the tutelage of his uncle, Isaiah Fadeyibi, a schoolteacher at Methodist School in Aboso. He attended Anglican Primary School, Tarkwa, and Methodist School, Aboso, followed by Anglican Middle School, Prestea. He began his secondary education in 1965 at Sekondi College and later attended Axim Secondary School.

After his School Certificate, he relocated to Nigeria in 1969 following the Alien Compliance Order by the government of President Kofi Abrefa Busia which triggered the exodus of other nationals from Ghana. That gave him the opportunity to visit for the first time his country Nigeria and his hometown of Ijebu-Jesha in Osun State. He continued his education at Ijebu-jesha Grammar School, passed his Higher School Certificate Examinations, and went on to study Mass Communication at the University of Lagos in 1973. He graduated in 1977 majoring in Broadcasting, and subsequently went for his one-year national youth service in the north central city of Jos.

He began his career as a Reporter for News Agency of Nigeria (NAN) after his national service. A year and half later in 1979, Awoyinfa joined the newly established Concord Newspaper owned by business mogul and politician, Moshood Abiola. At that time, Concord paraded the cream of journalism professionals including Dele Giwa, who was assassinated by mail bomb on 19th October, 1986. Giwa was Awoyinfa’s editor at Sunday Concord and an influential figure on his career.

At first, Concord’s Chief Correspondent for the north central state of Kaduna, Awoyinfa distinguished himself by his outstanding features. His feature-writing skill drew the attention of Dele Giwa who created the ‘Reporter’s Notebook’ column specifically for his weekly human angle reportage about his personal encounters in the northern part of Nigeria. Giwa eventually influenced Awoyinfa’s transfer to Lagos in 1984 and he promoted him to Concord’s House Editor to work directly with him. Giwa left Concord to establish Newswatch magazine in 1985. Awoyinfa subsequently went to Britain on a Harry Brighton Fellowship of the Commonwealth Press Union for a three-month training at the Sunday Sun at Newcastle Upon Tyne. At Sunday Sun, Awoyinfa was impressed by the British tabloid. While in Britain, his reports appeared in the Concord under the column ‘Awoyinfa in Britain’. Upon his return from Britain, he became Concord’s Features Editor.

Mike Awoyinfa’s style of human interest features was noticed by the Managing Director of Concord, Dr. Doyin Abiola who was planning to start a Saturday newspaper. At the time, a Saturday paper was a novelty in the country. Abiola commissioned Awoyinfa to design a template and subsequently gave him approval to begin Weekend Concord. With a handful of young writers selected from the Concord stable including Dimgba Igwe, who became his deputy, Dele Momodu,Femi Adesina,and Eric Osagie, Awoyinfa pioneered the “first Nigerian Saturday newspaper” in March 1989. Weekend Concord, which was premised on features and the human-interest model, is regarded as one of the most successful newspapers in Nigeria’s media history. On 28th December, 1999, after 10 years as editor of Weekend Concord, Mike Awoyinfa was promoted National Concord’s editor-at-large and his deputy, Igwe promoted to the editorial board of Weekend Concord. The pair subsequently left Concord.

In 2003, approached by Orji Uzor Kalu, a business man and governor of Abia State who was keen to found a newspaper, Mike Awoyinfa and Dimgba Igwe took on the task of establishing a newspaper in the tabloid tradition they had practiced successfully in the past. The pair set up The Sun Publishing Limited with Awoyinfa as Managing Director and Editor-In-Chief and Igwe as his deputy. They founded The Sun Newspaper on 18th January, 2003. After six months as a weekly, The Sun went daily on 16th June, 2003. Awoyinfa’s column, Press Clips, which he began writing at Weekend Concord, appears on the back page of Saturday Sun. In January 2010, Awoyinfa and his deputy, Igwe were abruptly retired.

Mike Awoyinfa and Dimgba Igwe wrote their first book, The Art of Feature Writing For Newspapers and Magazines in 1991 while they were editors at Weekend Concord. The book is widely used as a journalism text in higher institutions in Nigeria. They wrote 50 Nigeria’s Corporate Strategists in 1999 which turned out to be a business bestseller, and the 2001 biography Orji Kalu: Leadership Lessons From Master Strategists. They published Marketing Memoirs: 50 Case Studies in 2005. These publications appeared under MCDEE Books.

After leaving The Sun, the duo set up Corporate Biographers Limited and devoted their time to full-time writing and publishing. In 2012, another biography Segun Osoba: The Newspaper Years was released. A publicized biography on Mike Adenuga, Nigeria’s oil and telecommunications tycoon was withdrawn. On 15th September, 2015, 50 World Editors: Conversation With Journalism Masters on Trends And Best Practices was released to commemorate the one year memorial of Igwe who had been killed on the morning of 6 September 2014 while jogging.

Mike Awoyinfa is regarded as one of the outstanding feature writers in Nigeria, the person who changed the face of feature writing in Nigeria. Renowned for his human-interest approach to his newspaper writing, he is often credited by his peers and proteges variously as the “master of human angle stories” and father of tabloid journalism in Nigeria. Those he mentored usually refer to themselves as “members of Mike Awoyinfa School of Journalism” in acknowledgment of his role in instituting the human-interest type of journalism in Nigeria.

Awoyinfa writes in simple, easy to read English, made up of short, sharp sentences that are at times poetical and conversational. In newspaper writing, he “avoids the stiff and analytical in favour of the soft populist issues which he skillfully and deceptively weaves around powerful imageries and symbols that stir deep imagination at a dimension far stronger than logic.” He is also regarded as an exceptional headline caster in the traditional tabloid style. While his column has been described as socio-political, Awoyinfa frequently writes on any issue. He says “column writing is what motivated me to come into journalism in the first place.” In the books he co-authored with Igwe, they favoured the first person narrative approach, a style that is dominant in three of their books.

Why Mike & Dimgba are highly rated in the industry is because they are reputed as journalism innovators and stylists who revolutionised journalism practice in Nigeria through the trailblazing human-interest newspapers they had edited.

How does Mike Awoyinfa take his new age? How does he plan to celebrate it? What are the lessons life has taught him at 70?

These and many more were the questions that came to mind as we visited him at his Lagos home. We found Mike in an upbeat and happy mood. For 2 hours, we spoke about his life and the career he loves so much-Journalism. It was more of a lecture, than an interview because Mike, who is a living legend, shared with us the A,B,C of Reporting. He was at his best.

The only thing that makes him very unhappy right now is his recent bitter experience with Prostate Cancer and how he survived it.

This has made him slow down a bit. But has he really slowed down? No. He is working on 2 new books which will be ready soon.

All in all, he has written over 10 books. His prayer to God everyday is to spare his life a little more to enable him write more books.

Mike Awoyinfa lives in Okota area of Lagos with his family.